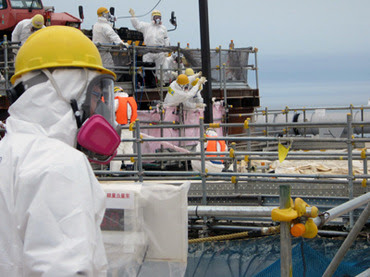 US Navy sailors sue Japan for lying about Fukushima radiation

American sailors have filed a lawsuit against the Japanese government for allegedly lying about the health risks they faced while assisting in rescue efforts after last year’s Fukushima nuclear disaster.

Crewmembers from the USS Ronald Reagan filed a lawsuit in Federal Court in San Diego, California this week in an attempt to hold Japan accountable for any long-term damage they’ll caused during “Operation Tomadachi,” the spring 2011 relief effort that sent sailors near the coast of Japan to assist in the days after an earthquake and subsequent tsunami ravaged the island nation and caused a level 7 meltdown at three reactors in the Fukushima Nuclear Power Plant.

The plaintiffs, eight sailors from the 5,500 or so that were aboard the USS Reagan at the time, say Japan did not act honestly in regards to explaining the severity of the meltdown and the risks they faced in involving themselves in the relief efforts. They are asking the state-owned Tokyo Electric Power Co (TEPCO) for $10 million in compensatory damages, as well as another $30 million in punitive damages for fraud, negligence, strict liability, failure to warn, public and private nuisance and defective design, Courthouse News Service reports.

Additionally, the sailors want TEPCO to set up a $100 million fund to pay for any future medical expenses they’re accrue as a result of the relief effort.
Courthouse News claims that plaintiffs say in the complaint that TEPCO, "a wholly owned public benefit subsidiary of the government of Japan," misrepresented radiation levels after the meltdown in order to lull the US Navy "into a false sense of security."

Beginning only one day after the March 11 earthquake, the United States sent eventually 24,000 service members to assist in rescue efforts at a cost cited by the Japan Times as being nearly $90 million.

"Operation Tomodachi has proven the Japan-US alliance can function in an emergency in a well-coordinated manner. US military personnel have proven to the fullest degree they are acting for the benefit of the Japanese people,"National Defense Academy Professor Matake Kamiya told the Times earlier this year.
Today, however, sailors from the USS Reagan say they were misled about how severe the situation was.

"TEPCO pursued a policy to cause rescuers, including the plaintiffs, to rush into an unsafe area which was too close to the FNPP [Fukushima Nuclear Power Plant] that had been damaged. Relying upon the misrepresentations regarding health and safety made by TEPCO … the US Navy was lulled into a false sense of security," the complaint states.

"Defendant TEPCO and the government of Japan, conspired and acted in concert, among other things, to create an illusory impression that the extent of the radiation that had leaked from the site of the FNPP was at levels that would not pose a threat to the plaintiffs, in order to promote its interests and those of the government of Japan, knowing that the information it disseminated was defective, incomplete and untrue, while omitting to disclose the extraordinary risks posed to the plaintiffs who were carrying out their assigned duties aboard the USS Ronald Reagan."

The complaint further alleges that TEPCO claimed the levels of radiation the sailors would be subjected to “would not cause any different or greater harm to them than they may have experienced on missions in the past,” though the Americans say otherwise.

"At all times relevant times, the defendant, TEPCO, was aware that exposure to even a low dose of radiation creates a danger to one's health and that it is important to accurately report actual levels,” the defendants say.

"Defendants had actual and/or constructive knowledge of the properties of radiation that would ensure that, once released into the environment, radiation would spread further and in concentrations that would cause injury to the plaintiffs."

The sailors say they have put themselves in a situation where their potential to develop cancer has been enhanced and that they "face additional and irreparable harm to their life expectancy, which has been shortened and cannot be restored to its prior condition."

In August, over a year after the meltdown, fish were found near the site of the Fukushima plant containing with 258 times the level of contamination that the level government deems safe for consumption.